(I enjoyed this review by Michael Dirda in the Washingon Post of the recent publication of Jünger’s War Journals 1941-1945 (Strahlungen I/II) into English… another not-insignificant chip off the mountain of untranslated works! A collection of further reviews of this English translation here.) 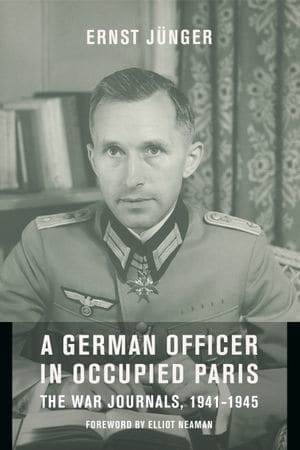 “As a teenager hungering for adventure, Ernst Jünger ran away from school in 1913 and joined the French Foreign Legion. His father eventually retrieved his delinquent child from North Africa, just in time for the 19-year-old to enlist in World War I. Over the next four years, Jünger would be wounded in action 14 times and, in 1918, be awarded the Pour le Mérite, Germany’s equivalent to our Medal of Honor. He remains the youngest man ever so honored.

In 1920, Jünger published “Storm of Steel,” an extraordinary memoir of his battle experiences. (I recommend Michael Hofmann’s translation for Penguin.) Like T.E. Lawrence’s near-contemporary “Seven Pillars of Wisdom,” the book views war from an almost Homeric perspective, celebrating the martial virtues of courage, comradeship and steadfastness; it is dedicated, apolitically, “For the fallen.” In the years following its publication, Jünger completed an astonishing self-transformation into an exceptionally well-read and cosmopolitan intellectual, one particularly passionate about French culture, entomology, mysticism and philosophy. While his political bent was distinctly right-wing, he resisted the era’s virulent anti-Semitism and never joined the Nazi Party. His allegorical 1939 novel, “On the Marble Cliffs,” is frequently read as a critique of Hitler.

When World War II broke out, Jünger — only in his mid-40s — loyally rejoined his old company, but was eventually assigned a desk job in Paris, where he pushed papers and, more importantly, kept a journal. This last has finally been expertly translated into English by Thomas and Abby Hansen as “A German Officer in Occupied Paris” with an excellent biographical-critical foreword by Elliot Y. Neaman.

Always intended for eventual publication, the journal eschews soul-searching and avoids anything overtly confessional. In its entries, Jünger records his dreams, migraines and depressions, describes his interaction with Parisian artists and aristocrats sympathetic to the Germans, closely inspects every flower and insect he encounters and obsessively reflects on the human condition. “The goal of life,” he decides, “is to gain an idea of what life is. In the absolute sense, of course, that changes nothing . . . but it helps our journey.”

Overall, Jünger remains essentially contemplative, an observer by instinct. “My conversation is often halting because I weigh each sentence before uttering it, anticipating any doubts or objections it could elicit. This puts me at a disadvantage with conversational partners who blurt their opinions.” Near the beginning of the journal, he dutifully forces himself to watch a German deserter stood up against a tree and shot. In his “Notes From the Caucasus,” the stark and appalling descriptions of what he saw on the Eastern Front recall Goya’s famous etchings of the disasters of war.

Mainly, though, Jünger writes about his day-to-day life in Paris. He visits painters in their workshops (Picasso, he writes, “appeared as a powerful magician, while Braque embodied a radiant geniality”), dines with the playwright Sacha Guitry, who shows him the manuscript of Flaubert’s “Sentimental Education” and discusses punctuation with Marcel Jouhandeau, who loves semicolons. Jünger notes that Paul Léautaud “hates imagery, similes, and digressions. He believes an author must express what he thinks with absolute precision and economy. . . . If one wants to say that it’s raining, then one should write, “It is raining.” During a stroll, Jünger thinks hard about his grammar and concludes, “I have to go deeper into the vowel sounds.”

Many of his lunchtime walks take Jünger to the city’s print dealers and antiquarian booksellers — “oases in a world of carnage.” He reads widely: Pliny’s letters and a glossary of medieval Latin, a biography of the Brontë sisters, the essays of Léon Bloy and Joseph Conrad’s “Heart of Darkness.” At bedtime he gradually makes his way through the Bible twice.

Far from home, the attractive, well-bred soldier embarks on at least one serious love affair with a Frenchwoman. Nonetheless, Jünger dispassionately registers the hatred he notices in the eyes of a Paris shop assistant as she sees his uniform, and he later feels ashamed when — for the first time — he encounters a trio of young Jewish girls wearing the odious yellow star. On July 18, 1942, he laments that “Jews were arrested here yesterday for deportation. Parents were separated from their children and wailing could be heard in the streets.”

Later on, Jünger learns about their fate in the camps but doesn’t risk taking a public stand against Kniebolo, his journal’s code-name for Hitler. However, he does privately criticize the generals who give in to the Führer and his demonic inner circle, those sycophantic “courtiers in the realm of darkness” among whom “the defamation of one’s enemy is a cult.”

Throughout “A German Soldier in Occupied Paris,” Jünger laments that “ancient chivalry is dead” and our wars are now “waged by technicians.” He despises the forces, industrial and ideological, that reduce people to machines or automatons. Against these we must fight to remain fully human, to resist “the tendency within our breast to harden, calcify, ossify.” Such high-minded ideals don’t preclude shrewd understanding about life in a police state: “Exaggerated prudence increases danger. People listen most carefully to those who disguise their voices.” Still, there is no armor against fate. While serving in Italy, Jünger’s beloved son Ernstel pronounces some defeatist criticism of the Reich, which ultimately leads to the young man’s death, quite possibly from an S.S. bullet in the back. Jünger and his wife are crushed with grief.

When the war finally ends, Jünger’s life is, astonishingly, only half over — he would live to be 102, dying in 1998. Some critics argue that his transcendental-mystical bent tends to aestheticize horror and suffering, which to some extent it certainly does. Still, Jünger himself deserves to be honored as a serious, if morally and politically complicated, European humanist.”

A GERMAN OFFICER IN OCCUPIED PARIS