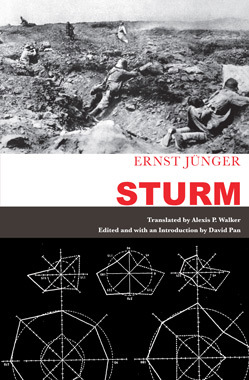 With an Introduction by David Pan

Set in 1916 in the days before the Somme offensive, Ernst Jünger’s Sturm provides a vivid portrait of the front-line experiences of four German infantry officers and their company. A highly cultivated man and an acute observer of his era, the eponymous Lieutenant Sturm entertains his friends during lulls in the action with readings from his literary sketches. The text’s forays into philosophical and social commentary address many of the themes of Jünger’s early work, such as the nature of war, death, heroism, the phenomenon of Rausch, and mass society.

Originally published in installments in the Hannoverscher Kurier in 1923, Sturm fell into obscurity until 1960, when it was re-discovered and subsequently re-published by Hans Peter des Coudres, a scholar of Jünger’s work.

This translation—the first to be published in English—brings to the English-speaking world a work of literature of interest not only to students of Jünger’s work and of World War I, but to any reader in search of a powerful story of war and its effects on the lives of the men who endure it.

BONUS!! Buy STURM on the Telos Press site and save 20% by using the coupon code BOOKS20 – valid for all other Telos Press purchases too! Note that Sturm is also available as a Kindle eBook at Amazon.com

“The rediscovery of Ernst Jünger’s Sturm, abandoned by its author after its first publication in 1923, significantly alters our understanding of Jünger’s place in modern European literature. The literary and aesthetic moments, frequently seen as secondary in Jünger’s early work, turn out to be constitutive from the very beginning. While the plot deals with the experience of war in 1916, Sturm’s ultimate concern is the possibility of radical modern art under conditions of extreme violence.”

“This translation of Sturm fills a long missing gap in the German war literature of the 1920s available to English readers. The translation by Alexis Walker is vibrant and precise while also reflecting the nuances and tone of the original German text. David Pan’s introduction sets the stage with a masterful overview of the context in which Sturm was written and pays particular attention to the debates since then on the aestheticization of the war experience.”

“Had Stephen Crane’s Henry Fleming been born in 1895 Germany, his story might very well have read like the eponymous protagonist’s of Ernst Jünger’s Sturm. In a fascinating novella in turn meditative and wrenchingly physical, Jünger stages a drama of one man’s ideas about himself, as told through a narration conflicted about its own subject.”

“Sturm is a subtle novella about an intellectual in the trenches who sees the age of industrial-scale war as deeply dehumanizing, yet recognizes that this war has given him a sense of identity, and of community with others, that no peacetime experience could match. . . . Jünger is a remarkable writer. In this novella he comes across as a romantic with a loathing of modernity, especially as characterized by the overbearing state. The book is grim, and deeply pessimistic—but exceptionally interesting, and well worth reading.”