Telos Press has just announced their newest Ernst Jünger publication: a republication of Eumeswil in the superb original Neugroschel translation!! 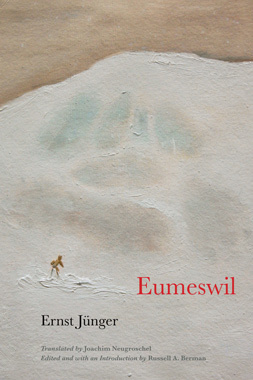 This is, in my opinion, their most important contribution yet to the dissemination of an author so under- and misread in the Anglo-Saxon world. For years now the original Marsilio publication (Eridanos Library, 1993) has been unavailable, or at least unavailable at normal prices, since single copies occasionally appeared on Amazon for $300 or more. Apparently there is demand, which underlines the importance of Telos making this “bible” of mature Jüngerian thought available to the normal reader at only $26.95.

But most importantly, this new Eumeswil makes the author’s critical concept of the anarch again accessible for study and discussion through the life and reflections of its protagonist and proto-anarch, Martin Venator.

(For a taste of the anarch’s worldview and life-strategy, see my partial compilation of anarch quotes from Eumeswil.)

I encourage you to buy directly from Telos Press – so giving them, the worthy beneficiaries, Amazon’s cut,

Here a couple of reviews included in the Telos announcement:

“Set in a post-apocalyptic future, Eumeswil is a brilliant novel of ideas that explores the corruption of power and conformism, even as the anarchic hero charts a course into an unknown freedom. This is a gripping intellectual adventure that merges the tradition of dystopic fiction with philosophical lucidity and a rare aesthetic sensibility.”

—Adam Johnson, author of The Orphan Master’s Son and 2013 Winner of the Pulitzer Prize in Fiction

“Even today Ernst Jünger’s late writings are overshadowed by his early work, whose focus on war and violence has largely defined the author’s reception in the English-speaking world. In short, the warrior and right-wing revolutionary have received more attention than the mature postwar writer. The novel Eumeswil is a good example of this persistent neglect. Its highly complex and ambiguous narrative is a brilliant work coming out of the modernist European tradition. Jünger’s ironic use of a first-person narrator undercuts any dogmatic understanding of the novel’s worldview, recasting the futuristic claims of the utopian tradition in the mode of skeptical reflections.”