Thanks to Eliah Bures for this excellent article in the Los Angeles Review of Books on the importance and best use of living memories of war in general and World War I in particular: Rest in Peace: World War I and Living Memory. Eliah focuses especially on Ernst Jünger’s war diary, the Kriegstagebuch 1914-1918, which appeared in print in 2010. 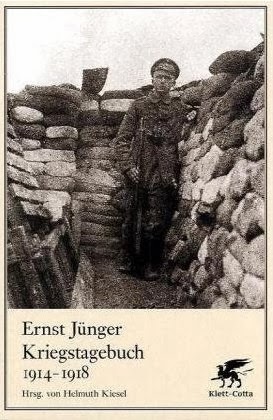 “One of the most revealing before-and-after comparisons has only recently become available. In 2010, Ernst Jünger’s Kriegstagebuch, 1914-1918
appeared in print, some 12 years after its author’s death at the age of
102. This “War Diary,” which records in meticulous detail Jünger’s 44
months on the Western Front, formed the basis for a host of memoirs, of
which Storm of Steel is undoubtedly the most famous. First published in 1920, Storm of Steel
underwent numerous revisions, evolving throughout that decade into a
manifesto of a “new nationalism” that recast Germany’s battlefield
defeat as a spiritual victory, the fiery birth of a new and hardened
warrior-elite who would redeem the nation. Even in the amended 1961
edition on which the recent English translation is based, Storm of Steel remains an arresting counterpoint to the received wisdom about the war.

What is striking, however, is how this classic statement of the
pro-war myth differs from the war Jünger recorded in his diaries.
Indeed, the Kriegstagebuch reveals a soldier who, though clearly the narrator in embryo of works like Storm of Steel, was more susceptible to the war’s grim absurdities than hitherto suspected. If the Kriegstagebuch
never gives up on the war as a heroic adventure, it also records
moments of clear disillusionment. As Jünger wrote in May 1917, in a
meditation on the war’s devastated landscape: “When will this shitty war
come to an end? What might one have seen and enjoyed during this time…
But still no end in sight.”

There is, in fact, hardly a trope, image, or barb familiar to students of the anti-war myth that fails to find its way into the Kriegstagebuch.
Jünger resents the orders of staff officers and begrudges ideas about
the conduct of the war from those “rear-area pigs” less acquainted than
he with conditions in the front lines. The gulf between the truth of
actions Jünger has taken part in and the sanitized accounts that appear
in official communiqués calls forth responses ranging from bemusement to
disgruntled annoyance. Time and again he catalogs the miseries of rain,
mud, cold, lice, boredom, shabby quarters, meager rations, interrupted
sleep, and sheer exhaustion. And above all there is the ubiquitous
presence of corpses: the soft feel of bodies beneath one’s feet; the
unmistakable smell of decomposing flesh, particularly unwelcome at
mealtime; the sight and sound of maggots; bodies bloated and covered in
flies; the discovery of corpses — or, more often, a mélange of their
component parts — while digging in; and the relentless effects of
artillery, disturbing and dismembering bodies long dead like a plow
turning and breaking the soil. (“Not even the dead,” Jünger dryly notes,
“are permitted to rest in peace.”) Death, when it comes, strikes
randomly and from points unknown. That the liberal consumption of
alcohol figures so prominently in Jünger’s diaries is hardly a surprise.”