“Here is a man who is free. 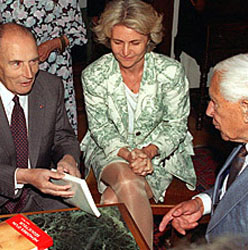 Embroiled to the point of risking his life in the turmoil of the century, he held himself apart from his passions. Nothing can appropriate his name, nor his gaze, except perhaps that butterfly in Pakistan now called “Trachydura Jüngeri”, which is his pride. Because this rebel chases glow-worms, this soldier writes novels. A philosopher, he possesses an appetite for living, which time has not wearied. Few life works are more diverse, few minds more restless. As inheritor of Goethe, of Hölderlin and Nietzsche, but also of Stendhal, Jünger’s thought unites the riches of the Enlightenment with those of Romanticism, the rigour of the one with the generosity of the other.

His thought challenges fashions and attracts disputes. Lovers of systems hanker in vain to find them in it. Truth is to be sought in it like an equilibrium amid contrary forces. Between engagement and resistance, respect for the real and rejection of the predestined, Jünger charts the space of human freedom and its authentic struggles. Because its origins lie in its enthusiasm for life, it contemplates and faces contradictions: between mind and matter, nature and history, reason and dream.

Likewise with his idea of progress, which repudiates alike the prophecies of Hegel and Marx and the pessimism of Spengler. No one has better grasped than him the advent of the world of technology, its benefits and catastrophes. If he deems inevitable the triumphs of science and numbers, he struggles against the excesses of their conquest.

Likewise with his thoughts about religion. He is agnostic, but has a sense of the sacred; he is an entomologist, but is at home with the irrational and affirms his faith in the survival of the spirit.

Likewise with his passion for time – “the wall of time” as he likes to put it. He collects hourglasses and has written a treatise on them. Here too, between the temptations of surrender and refusal, Jünger faces the enigma and establishes a kind of wisdom. We talked about all that during our all-too-short meetings. The man before me impressed me by his demeanour. It is that of a Roman, haughty and simple, unalterable. I salute him and offer him my good wishes for a hundredth birthday in peace. But I know this: he and peace have long belonged together.”  29 March, 1995

(Translation from the French by Liz Heron. Originally published in German translation in the F.A.Z. 29.3.1995, Feuilleton).