December is for dreaming and my own clear favourites are flying dreams. Here then, from Das Abenteuerliche Herz, Zweite Fassung, is my translation of “Flugträume”, followed by an exposition of my own flying dreams and perhaps comments from readers with theirs!

“Flying dreams are like memories of the possession of a special spiritual power. In truth, they are more dreams of floating, throughout which a sense of gravity always remains. We glide forth into the twilight, close over the ground, and if we touch it the dream breaks off. We float down the stairs and out of the house and occasionally raise ourselves over low obstacles like fences and hedges. At these points, we push ourselves up with an exertion that we feel in our bent elbows and balled fists. The body is semi-prone, as though we were lying comfortably in an armchair, and we float with legs forward. These dreams are pleasurable; but there are other horrible ones in which the dreamer flies over the ground in a rigid posture, bent forward with his face down. He raises himself stiffly from the start, in a sort of catalepsy, by tracing a circle over his toes with his body. He glides in this manner over nightly streets and squares, once in while popping up like a fish before lonely passersby and staring into their terrified faces.

How effortless by contrast seems the lofty flight that we see on early floating pictures. Pompey is a site for such finds as well. A wonderful, uplifting vortex bears up the figures here, though it barely seems to ruffle their hair or robes.”

Years ago, an unorthodox biology professor of mine made an informal survey of the various flying dreams we students had – soaring, floating, prone, upright, etc. At the time I had nothing to contribute, but at some later point, I began “learning to fly” in my dreams. Regarding the possibility of learning in dreams, Jünger himself talks of waking up after certain dreams with the impression that he had been “practicing with exotic new weapons”. In my case, once initiated upon this new course of study, it developed over the years to the point that I could now outclass Superman and perhaps even soar with an angel!

The first tentative flights were low, Tibetan monk-like levitations, undertaken from a cross-legged position and powered by great mental concentration. As in Jünger’s experience, gravity was a force to be overcome, and the hovering only succeeded when the concentration was sufficiently intense and steady. Any momentary lack of confidence or fear of falling weakened it and I would then sink back down in fulfilment of these fears. 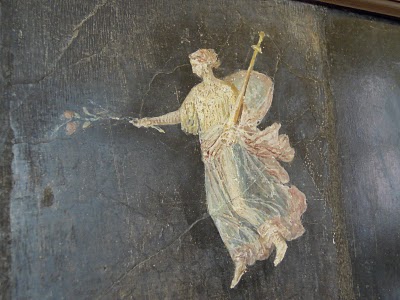 But soon I learned to take off from a standing position, simply rising off my feet or springing into the air, and then fly with arms stretched forward or out to the sides like the wings of a gliding bird. A real evolution over time occurred, because with each successive dream I remembered where I had left off last time, what I could already do, and so moved onto new experiments. The pull of gravity also steadily disappeared with this evolution and the quality of concentration required became more subtle, less effortful. I gained confidence and with it a new delight in flying. Indeed, my day after a night of flying is nearly always a cheerful one, because I wake up so optimistically – once I manage to drag myself into mundane waking reality from the incomparably more exciting adventures of the bed.

Soon I could do loops, even backwards like a hummingbird, fly with perfect control in buildings or soar very high, above the skyscrapers and clouds, and even play with plummeting to the ground and breaking off the dive just before impact. In one particularly memorable dream, I flew to the moon and installed a reflecting mirror on its dusty, grey surface so that when I returned to earth and to waking reality I could prove that I had “in fact” been there! In another exquisite, never-repeated dream, I did looped over and around people and then flew right through their bodies, like a ray of light through glass or water.

Curiously, I always fly alone, though a few times I have taken a woman in my arms and flown with her, usually without labouring under the extra weight. Even more curiously, and in contrast to Jünger, the people on the ground have never marvelled or even noticed my aerial antics. They do not ignore me, they simply don’t see me – and because this hurts my vanity, I perform yet more acrobatics to gain their attention and admiration. I am astonished by this lack of attention and think: my God, if some human being flew by in the main street, wouldn’t people fall down on their knees in astonishment?!

Yesterday however I believe I solved this riddle and in the process also had a minor epiphany on dying….!

I was lying on the coach listening to some heavenly Vivaldi and consciously relaxing my tired eyes by “palming”, as described by Aldous Huxley in his “Art of Seeing”. Part of this exercise consists in imagining in one’s mind’s eye a pleasant scene from the past. Having had a flying dream the night before where I circled around in the dome of an enormous cathedral and then lifted it up off its supporting walls with my shoulders, I actively recalled these images and sensations. Forgetting my body and further uplifted by the music, I almost seemed back in the dream – flying and yet awake.

Suddenly a remarkable idea flashed through my mind: could this be what dying is like?!! An ecstatic flying dream in which one is blissfully and permanently liberated from earthly gravity and concerns; one rises up and plays in the air above the living or soars way up into heavenly strata whose rarified atmospheres I can almost extrapolate from the moderate heights I have reached in my dream flights.

With hot tears in my eyes and a glow in my chest, I revelled in this wonderfully liberating image of death, one that eliminates all dread and seems positively desirable, better than life itself! If something yet more blissful than my most ecstatic flying dreams really awaits at the end of my life, why then I can be infinitely patient, tolerate whatever trials life may present in the meantime. Such faith would be like having an absolute guarantee of an exquisite, endless vacation at the end of a hard year’s work – no matter how terrible the here and now, one day we will lift off the ground for a heavenly altitudes!

Of course, after returning to earth and to my rational mind, I recalled that many religious after-life conceptions include a feathered soul of one kind or another – the Egyptian BA, our own angels, and so forth.  And near-death experiences are also said to be ecstatic, extremely desirable flight-like departures from the body.

But it is always quite another experience, a far more powerful and important one, when one comes to an independent discovery of some universal truth. In the end, the personal discovery is the only thing that matters.

Anyhow, now it is also now clear to me why those on the ground never notice me flying – because they are flights in the spirit, not the body.

So much for my experiences and Jünger’s – what about your flying experiences!?