I’m going to stray from direct reference to Ernst Jünger here, though it will be in the train of his thinking regarding global “levelization” or flattening of culture.

I was in the United Nations building here last week, since I can do duty-free shopping there. Indeed, I have no other reason to go, since the place basically depresses me everytime I visit.

Why? Because it becomes apparent there in microcosm how globalization ultimately leads not to a fascinating colorful tapestry of cultures but to a uniform “global grey”.

If one imagines taking all the world´s flags and composing a mosaic of them, on a sphere like this unknown graphic artist has done, a cheerful and stimulating impression results. According to color theory, if one spun this globe very fast, assuming all the colors of the rainbow were present in the various flags, a pure white would result. This is additive color mixing – the frequencies of the colors are added to each to produce full-spectrum visible light, which is white. 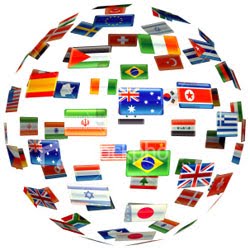 Thus far an optimistic analogy for globalization – and it may even hold, at least temporarily, in certain cultural fields, like music, produce markets, fashion.

But another process called subtractive color mixing can also occur by a mutual subtraction of each color from the other. A perfect result is black, but more commonly shades of grey-brown result since not every color is present in equal proportions. If you´ve ever mixed lots of randomly colored house paints together, this is what you get – something ugly and without light.

It occured to me in the UN that subtractive mixing happens here – and that this is true for globalization as a whole. Though the kind of propoganda one hears in such places purports to emphasize the value of our differences, in fact it is far more concerned with our “equality”. Thus the light of our individual colors are not added to each other to impress the eye by their contrasts and produce an illuminating white light, but rather everything unique in each of us is subtracted from us, so that we end up “levelized”, equal.

Equally grey, that is….grey Africans, grey Americans, grey Chinese, grey people in general. I am horribly fascinated by these spectres that haunt the corridors of the UN everytime I visit.

(The dull color obtained there and in globalization in general is not black or dark brown as it would be if all colors were equally thrown into the mix, but rather grey since the predominating influence comes from the American/European “white race” – their politics, fashions, work ethics, family values and world view in general.)

To avoid confusion here, it should be noted that when colored paints are mixed in a pot, for a moment the effect can be very interesting as the colors swirl through and around each other. But then they begin to coalesce and there is no retreating from the outcome – global grey.

But what of it!? This little illustration is here for my satisfaction and for the enlightenment of a few anarchs out there who want to know what the weather will be and how to prepare for it. None of us aspire to challenge the weather – or the meta-historical necessity of these processes.